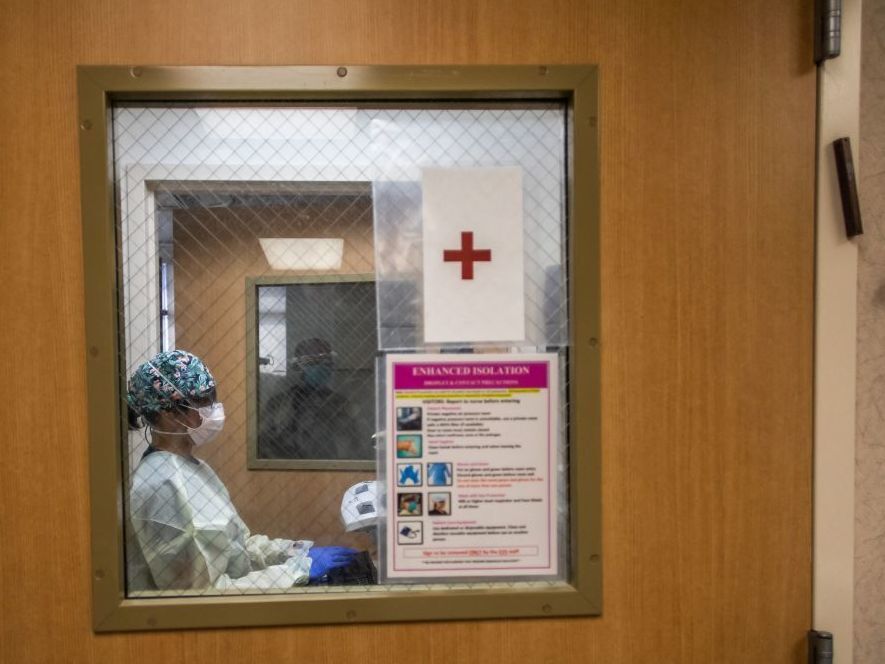 With a second pandemic winter approaching, there are promising signs that the worst of the delta surge has run its course, but in America’s hospitals — already short-staffed and backlogged from the summer torrent of COVID-19 — the relief may only be short-lived.

Many are staring down a tough stretch of colder months with the threat of a potentially bad influenza season, an influx of patients trying to catch up on delayed care and a depleted workforce that’s had little time — if any — to regroup from this latest wave of coronavirus infections.

And while some of the leading COVID-19 modeling suggests the U.S. will be spared another major onslaught of the coronavirus during the holiday season, recent history has shown hospitals that nothing is predictable with this virus.

«We need to be prepared for always having some individuals who are infected with COVID in our hospitals and needing acute care,» says Dr. Amy Williams, executive dean of the Mayo Clinic Practice.

The much-feared «twindemic» of influenza and the coronavirus didn’t hit last winter, likely in part because of the social distancing and masking that people undertook in response to the coronavirus.

But some experts fear that last year’s remarkably mild flu season has now set the stage for a big rebound in the coming months, because fewer people have built up immunity.

In past flu seasons — not including last year — there were on average about 300,000 to 400,000 hospitalizations for influenza, he says. Two recent studies from Roberts’ and his colleagues suggest this season could bring an additional 100,000 to 400,000 flu hospitalizations. Research on previous flu seasons has estimated there were between 18,000 to 96,000 ICU admissions associated with the flu, depending on the season.

Flu season is hard to predict, and it’s possible these worst-case scenarios will not happen, but that depends on the strain of flu that predominates and people’s behaviors.

«There’s quite a checkerboard of COVID mitigation in the United States, and so how much influenza you see will be dependent upon that, as well as how many people get vaccinated against the flu,» Roberts says.

Plus COVID isn’t entirely going away, even with optimistic predictions.

Modeling from the CDC and others show there could be a steady decline in cases on a national level, but there may very well be enough virus to fuel regional outbreaks and to keep some hospitals busy.

«I still expect to see some surges,» says Stephen Kissler, a research fellow at the Harvard T. H. Chan School of Public Health. «I don’t think we are totally out of the woods yet.»

The combination of even a mild to moderate flu season and what remains of this current wave of COVID-19 is likely to strain precious ICU resources, says Dr. Greg Martin, president of the Society of Critical Care Medicine.

«The delta surge is not going away as quickly as anyone would like, and that long tail is creating a lot of uncertainty and anxiety,» he says.

Catching up on deferred care

Patients already tend to show up to the hospital sicker during the wintertime and this could be especially true this year, after the massive disruptions in health care access created by COVID-19, leading to a backlog of delayed care.

Some patients have been forced to put off much needed surgeries and inpatient treatments, while others have stopped routine doctors appointments that might have caught some growing health problem before it became too severe, says Vituity’s Gregg Miller.

«We’re already dealing with a baseline of sicker patients [in wintertime], so what’s going to happen when it’s colder and people slip and fall? Or they’re a little bit more likely to get a mild cold that tips over their heart failure?» he says.

Many hospitals have tried to avoid halting much needed medical procedures for other kinds of patients during this latest wave of COVID-19, but that has not necessarily been possible in some hard hit states.

Myint expects they will be working through deferred care for a while, given the demands of COVID-19 in their hospitals right now.

«We’re still at the levels that we were at the peak of last winter time and last respiratory season,» he says.

After surge after grueling surge of COVID-19 patients, the health care workforce is flagging, with many parts of the country simultaneously experiencing major staffing shortages.

«The crisis that we have unfolding in this country right now is the inability to provide the right staff for the patients that need care,» says Dr. Omar Lateef, CEO of Rush University Medical Center in Chicago.

This loss in health care providers is particularly pronounced in nursing, and many hospitals are competing fiercely for the same limited pool of travel nurses to fill the gaps. There are also concerns that COVID-19 vaccine mandates could further erode the workforce, although Lateef says that isn’t the driver of their staffing problems.

«It’s truly related to supply and demand,» he says. «And the difference now from years past is we’ll have this increase in patient volume nationally, around the same time that we have a decrease in health care providers.»

«Instead of retiring in one or two years, they’re retiring now,» he says. «A lot of those experienced people teach the younger folks as they come in, so there’s this tension of losing senior people and losing those that would be training on the job.»

And this couldn’t come at a worse time. With all the compounding factors, health care workers are dreading the oncoming rush of patients this winter.

«People are tired in health care and there’s a burnout that we haven’t seen in this country [before],» says Lateef. «That combined with the increased volumes we expect in winter sets the stage for even more burnout in the future and even more staffing issues.»